From the above blog entry:


To our knowledge, iMazing is the only non-Apple software to enable users to download their purchases from the iOS App Store. We strongly hope that Apple won't block iMazing's app download capabilities: we've done our best to provide tools which many iOS users truly need.

I haven't tried this fantastic idea of iMazing's yet, but frankly I suspect the functionality won't work for long. I expect Apple will indeed block this capability, because Apple doesn't want general users to have an easy way to run older apps, which could be a security risk (iTunes 12.7 removes ability to save .ipa files to PC).

If you are a "Redditor", you may be quite pleased by the new Apollo Reddit Client app, whose version 1.0 was just released a couple of days ago. (If you are not a "Redditor", you can search the Internet for "Reddit" to learn more.) The developer has previously worked at Apple and states that he has designed it with a very iOS-feel (perhaps unlike the official Reddit: Trending News & Tips client app, which is made for both iOS and Android and supposedly tries to maintain a similar feel -- I myself am strictly an iOS user, so can't comment on the Android aspects). I liked it immediately -- it just feels right and smooth.

I previously bought the (In-App) Pro version of the BaconReader for Reddit client app, but have run into some very slow data loading with it of late, something which doesn't seem to occur with Apollo (or with the official Reddit: Trending News & Tips client app). One other nice Apollo aspect I like is the separate-colors-of-the-rainbow (well, maybe missing indigo) marking (with horizontal bar) of different levels of comments, which helps see the hierarchy. BaconReader may soon no longer be my primary Reddit client app.

The developer states he is keen on making more improvements, and is looking for suggestions for same. See the ApolloApp subreddit for more....
Posted by Ken Ho at 10/26/2017 07:00:00 AM No comments:

iTunes 12.7 removes ability to save .ipa files to PC

In what I imagine is a continuing push toward greater control over the apps running on iOS devices, hopefully in the name of security as opposed to inconvenience to users, Apple has removed the ability to save .ipa files (which correspond to apps) onto one's PC (or Mac, presumably) starting from iTunes 12.7 (Apple removed the App Store from within iTunes). If you value that capability, you will probably not want to upgrade your iTunes software if you still have a pre-12.7 version.

For loading .ipa files onto iOS devices, I have generally switched to using CopyTrans (not iTunes), as I wrote here. However, ever since iOS 9 (per ), the only way to get those .ipa files was through PC iTunes. iOS 9 removed the ability to transfer .ipa files onto a pc from apps already loaded onto an iOS device.

I have periodically had a need or desire to load an earlier version of an app, when some aspect of the current version wasn't working the way I wanted. Less than a month ago I so reverted Opera Mini to the earlier version 14, since the new version (16) forcibly includes a bunch of mass-market web articles, which I don't want. (Reverting conveniently fixed a space-rendering problem when viewing various websites [though notably not Google News], a problem which started perhaps a few months earlier, and which I'm guessing was due to some Opera Mini data corruption on my iPod.)

I don't think Apple is likely to ever reverse this change, so I'll be staying away from iTunes 12.7 and its successors as long as possible.

9/21/17: Apple still provides access to pre-12.7 iTunes installers for Windows (search for "itunes" on https://support.apple.com/), but that could change at any time:

Mnemonic for the character for mouse

I recently made this mistake while trying to remember how to write the character for "mouse":

Taking a closer look at it, I thought of a way that I could remember how to write it (my problem being the bottom half) correctly in the future. The four dots in the lower half represent the feet of the mouse, and the long "foot-less" (dot-less) stroke represents the tail. Since Chinese characters are written left-to-right, top-to-bottom, and when drawing a mouse, out of habit I would normally draw the head first, on the left, followed eventually by the tail on the right (that may be a consequence of my being right-handed and not being a very good artist).

The correct character (far more professionally rendered than mine!) is:

During my investigations, I also discovered this was a component of other characters, such as in these "mouse-related" words (詞):

The excellent Pleco dictionary app (I really should write an updated review for that, it's great) has a host of others for different rodents and more, but it's impossible for me to judge how frequently any given one is used by native speakers. I myself have been using 臭鼬鼠 verbally for years, and saw 鼴鼠 in a children's book, and am confident that native speakers truly use those two in everyday practice (as opposed to, say, only in zoology-specific contexts).
Posted by Ken Ho at 3/12/2017 07:00:00 AM No comments:

Email ThisBlogThis!Share to TwitterShare to FacebookShare to Pinterest
Labels: Chinese

For years I've loaded and updated apps on my iPod, currently running iOS 10, mostly using the iOS App Store app, but occasionally using PC iTunes. PC iTunes was often useful when I wanted to restore a version of an app older than the current version in the iOS App Store, which was possible when I had a copy of the .ipa file for the older version of that app.

Recently I had a major crash of my iPod, which apparently seriously jammed up something for the Amazon Kindle app, which I had been attempting to update from 5.4 to 5.5. After that crash, I was not able to finish updating the app on the iPod using the App Store app. 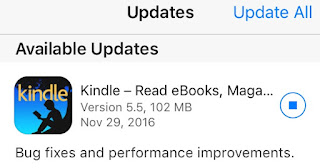 Attempting to do so had rendered my existing version of the app unusable. My initial solution was to use an old .ipa file (a pre-5.4 one was the last I had saved) using the free CopyTrans Windows software, which restored decent functionality (i.e., I could read my books!), even if the app's features were not as good as those in a newer version.

I had expected/hoped that when the next version of the Kindle app came out, I would be notified within the iOS App Store app, and upgrading would be possible. Apparently things were gummed up worse than I thought, since "Updates" notifications of newer versions of the Kindle app didn't even show up within the App Store app. The display was still just stuck on the jammed up 5.5 version.

When I learned that Kindle app version 5.7.1 was available, I tried to update to it, but that, not surprisingly, jammed up my existing older (pre-5.4) version. I deleted that, and tried to load 5.7.1 using the App Store app, but again had no luck.

Finally I remembered(!) that I could download apps within PC iTunes*, something I have rarely done. Unfortunately, the Kindle 5.7.1 app (the ipa file) could not be transferred to my iPod via PC iTunes due to an authorization problem.

CopyTrans to the rescue! From their web site and probably elsewhere on the Internet, you can find out more, but I wanted to give a shout out to this great tool for management of apps on iOS (actually, they have a set of tools, some free and some paid). CopyTrans may be able to help others out with management of iOS apps and data, particularly if you are having problems using iTunes PC/Mac software and/or the iOS App Store app.

Here's hoping that future versions of the Kindle app can once again be straightforwardly updated from my iPod! (3/2017: Nope, not on their own, but upgrading from iOS 10.0.2 to 10.2.1 fixed that problem, allowing me to upgrade to Kindle 5.8 directly from my iPod.)


*Note: According to https://www.copytrans.net/blog/what-you-need-to-know-about-ios-9-and-the-backup-of-iphone-apps/, starting from iOS 9, it is no longer possible to back up apps from an iOS device to a PC (or presumably to a Mac) using iTunes, nor by using the CopyTrans Apps tool. A laborious solution (if, e.g., you want to keep the .ipa file for an app version) would seem to be to download the app into iTunes, and save a copy of that .ipa file elsewhere.
Posted by Ken Ho at 2/22/2017 07:00:00 AM No comments:

Almost a year ago, I bought a 6th generation iPod touch, which has largely been a huge improvement over my previous 4th generation one.

However, it has had maybe half a dozen "blackout crashes" from Sleep mode (screen stays dark), which I had imagined were due to faulty hardware. Although an in-warranty replacement would include the benefit of a new battery and shell, I hoped to keep this unit since I'd had the back personalized by Apple.

When it has plenty of remaining battery power, I've put it into Sleep mode, only to find that it won't turn on (Wake) when I pressed either of the two physical buttons. Up until a few weeks ago, my fix had been to charge it for a long time (e.g., overnight), then hope it turns on (Wakes) later, which did work but was frustrating.

Eventually I searched on the Internet and found the "Force restart iPod touch" solution, which worked for me and is in Apple's downloadable iPod touch (iOS 9.3) manual as well:

"hold down the Sleep/Wake button and the Home button at the same time for at least ten seconds, until the Apple logo appears."

Maybe I'd used this technique for earlier iPods, but if so, I hadn't remembered it.

Email ThisBlogThis!Share to TwitterShare to FacebookShare to Pinterest
Labels: iPod

Sea creatures in Chinese and French 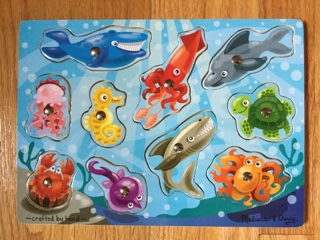