7/8/12: Click for my blog entry about (later abandoned) complementary usage of the iOS 5.1 Podcasts app.

Having just been jarred awake about getting podcasts "over the air" onto my iPod using the Music app, here are my candidates for working on improving my French (I may update this list over time):

I found the longer News in Slow French nice to listen to during hands-full cooking. Some listeners may object that one of the hosts is not a native French speaker (probably an American, I would guess; don't know if he ever states where he's from), but he has good style and carries on lively dialogue with the other host (hostess, usually; a few different women during the time I've been listening).

I previously listened to my old friend Louis (Learn French with Dailyfrenchpod.com) on the Zune during quiet lunches, when it was convenient to replay things for review. Louis explains many words and expressions. Dialogues are at normal "unfettered" speed; he explains selected content, and then you hear the dialogue a second time.

I was beaming for quite some time when I accidentally tapped the iPod screen and discovered that text is included with these podcasts (associated text may be available at the websites, too, but I don't normally go to those, I just listen on the iPod). I happened to be listening to One thing in a French day, which, as noted above, included the full text until 6/4/13, so this discovery was particularly exciting. That text gives me an option to just have some French reading practice, if I'm ever in a situation where listening to the podcast is inconvenient or undesirable. Because of its format, One thing in a French day lends itself well to (potentially) including the entire text (swipe up and down to scroll). The other two podcasts have lengthier content, so it's perhaps less practical for those creators to include the full text. 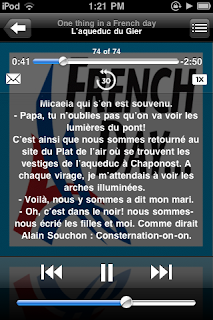 All of these podcasts are wonderful, and in just a couple of days of listening, I feel I have already learned good stuff. Did you know the (or at least some) French say arobase for the @ in e-mail addresses? Laetitia (One thing in a French day) includes that in each episode's closing, so I looked up what I incorrectly imagined was a robase. Common name for a cell phone? That's portable, which I know now from Rylan (French Podcast). Louis (Learn French with Dailyfrenchpod.com) taught me that I had the wrong impression of how to pronounced suggérer (to suggest) -- I didn't think there was a (brief) hard g sound in it at all.

There may be other similarly wonderful advanced French podcasts, but these showed up first on iTunes in my search (real estate's "Location, location, location!" is analogous to the value assigned by Google's Page Rank), but I doubt I'll look further as long as these creators continue to produce more, similar quality episodes.

Occasional episodes from Learn French with Dailyfrenchpod.com (e.g., 1270 - Real Life French: un attroupement) and from One thing in a French day (e.g., Le parc de Couzieu) report that they "cannot be played on this iPod" when I try to download them. I'm not sure why, but it is not a big deal if I miss an episode here or there.

While some podcasts have little value after having been listened to, I always wished that I could mark a podcast series as one whose episodes should not be deleted by Zune sync-with-PC operations. I never found an option in the PC Zune software to do that.

I am so pleased that retention of podcasts on an iPod is totally under the user's control (some info from Apple discussions). I no longer have to fear that my French (or other) podcasts will be deleted against my wishes during such synchronization.

Previously, on my 3rd generation iPod Touch running iOS 4.3.5 (10/18/12: I've actually been on a 4th generation iPod Touch running iOS 5.1.1 for some time now), processing a long list of podcast episodes does take a significant amount of time:
In the iTunes app on 10/29/11, Linguistic 360: News in Slow French has 35 total (lifetime) episodes, and One thing in a French day has 20, which Laetitia has presumably chosen as the maximum to show there at one time.

After syncing to a PC, in the left panel under Devices > (your device name) > Podcasts, you can see how many times you've listened to a particular episode, which may be of interest.

Although I often use the White Noise app to help drown out external noise when trying to sleep, on quieter (too quiet?) nights, I have sometimes found it helpful to fall asleep to some One thing in a French day episodes (perhaps excluding those involving excited children ;-) ), though I doubt that is greatly strengthening my French....

11/26/11: Under iOS 5.0.1 (I used iOS 4 when I first wrote this entry), I recently noticed that after tapping the FREE button for an episode, it turns into DOWNLOAD for some podcasts, but into GET EPISODE for others (only Learn French with Dailyfrenchpod.com of the above three podcasts). DOWNLOAD doesn't get redrawn on the iPod when tapped, which speeds up the process of queuing for download, particularly helpful when you're downloading many episodes. Maybe the GET EPISODE button has some benefit for podcast producers?

10/18/12: Under iOS 5.1.1 on my 4th generation iPod Touch, which is now loaded with over 800 French podcast episodes, I try to quit all other apps before loading new episodes. For Learn French with Dailyfrenchpod.com, of which I have 512 episodes, I try not to queue up more than one at a time for downloading, to minimize the risk of iTunes crashing, based on unpleasant experience.

4/27/13: I rarely use Spotlight Search for anything, but I just realized that if you allow it to search Podcasts (in Settings > General > Spotlight Search), you can search podcast episode titles, which could help you do word(s)-focused review. I just did such a search for Grève (strike), and 5 episodes from Learn French with Dailyfrenchpod.com came up. Spotlight Search is apparently a case-insensitive "and" search, so if you enter "soleil du" or "du soleil" you will only get episode titles having both of those words (anywhere), and not those having only one of those words.
Posted by Ken Ho at 4/10/2011 01:15:00 PM