The (free) e+ Chess Books (version 1.2.0) is a superlative reader app for chess e-books, allowing you to play through games/positions, in addition to simply displaying book text. Almost all the tasks which are "troublesome" (to varying degrees) when working through a printed chess book have been elegantly and efficiently implemented for landscape orientation use of the small screen of an iPod (or iPhone).  All the images below are from the included e+Chess User Guide.

The text, including diagrams, of the e-book is on the left half of the screen, while a chessboard is on the right. The current move is identified in both halves of the screen as you progress through a game (e.g., we are right before Black's 15th move in the chessboard below). You can read backward or forward (e.g., by using the swipe action) through the left half text without affecting the right half (although tapping on a move in the text will update the right half). You can change the size of the left half text, but I found the default size acceptable. Some of the pieces in the figurine algebraic notation are a bit fuzzy, but that is a minor distraction. 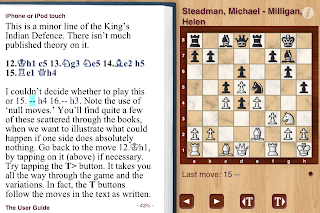 Chess books typically include sequences of hypothetical moves ("annotations", discussing what things would be like if the players had played moves different from those moves played in the actual game). e+ Chess Books allows you to choose between playing through only the game's actual moves (the < and > buttons), or through all moves, including those in annotations (the <T and T> buttons; T for Text, presumably). You can freely switch between these two ways of going backward or forward.

To go directly to actual game/position moves or annotation moves, tap on the desired move in the left side text. This automatic update of the right side chessboard eliminates the chore of manually resetting pieces on a physical chessboard, no matter which moves you're reviewing.

For chessboard positions presented as puzzles/exercises to be solved, a Solution button is provided, concealing the solution moves until you are ready to see them.

Before the Solution button has been pressed: 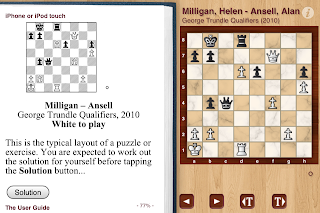 After the Solution button has been pressed, and having proceeded to Black's hypothetical 34th move: 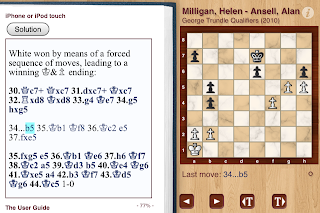 The developers took the initiative to improve the way example positions could be presented. In a print book, example positions are accompanied by moves explaining correct play. In e+ Chess Books, such examples can be converted into a puzzle, but instead of a Solution button, a Reveal button would be used (not shown here). This approach affords more opportunity to think about a position without immediately reading a discussion of possible moves. I have yet to see one of these myself, but I imagine such example-puzzles converted from print books might not read totally naturally, since the author's original writing would not have included provisions for same. However, you can always tell from each diagram in the text, or from the right side chessboard, whose turn it is to move (the accompanying little circle is hollow for White to move, solid for Black to move). I imagine two diagrams and slightly modified text may be needed in an e-book if the corresponding print book's diagram caption is "Black to move and draw; White to move and win", at least if a Reveal button is used. 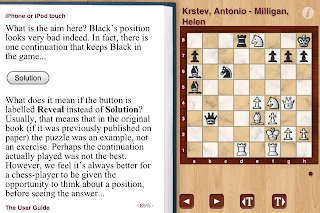 This app does not currently allow you to add bookmarks or notes. Even without those capabilities, this app remains even better than what I imagined as a well-designed chess e-book reader, such as touched on by myself and others in this Amazon book review comment thread.

A figurine algebraic notation version of the out-of-copyright Chess Fundamentals written by former World Chess Champion José Raúl Capablanca is free to download within the app. This is the first free e-book version of that which I found whose move notation has been modernized from the original descriptive notation, and that is a welcome sight indeed. My previous investigations into using other e-book readers (ones not specialized for chess) for Chess Fundamentals were interesting experiences, but I will be using the e+ Chess Books app from now on while working through that book. Since getting it in e-book format several months back (prior to discovering this e+ Chess Books app), I've probably worked through more of its material than I had during the 20 or so years I've owned the print edition.

If you use the same Apple ID for multiple iOS devices, the folks at e+ Chess Books have informed me that purchased e-books can be shared without additional cost by using the Restore All button.  To check on something for this blog entry, I deleted this app then reinstalled it over wireless, and re-downloaded Chess Fundamentals.  The left half text was oddly blank until I used the Restore All button, but it's behaving normally now. Subsequent communication with them indicated that the text half of the screen going blank was caused by a lack of RAM, which typically affects older/smaller iOS devices -- the iPad 2 and "the new iPad" (3rd generation) are probably immune to this problem. Their recommendation was to use the Reset button in Options. Restore All fixed it, but was not the most direct solution.

As of 5/12/12, there are eight "activated" (put into the app-specific e-book format) chess e-books available for purchase.  I look forward to more titles being released; even some print books I already own would be worth buying again for use with this app.


This app looks even better on an iPad with its much larger screen area, but the developers made stellar design decisions for the small screen of the iPod/iPhone. Their only practical competitor that I know of is Chess Viewer (version 2) from the Everyman Chess publishing company; that app will of course serve as the delivery avenue for Everyman Chess books. However, on an iPod/iPhone, that Chess Viewer app can at one time only display EITHER the chessboard accompanied by two move pairs OR the book text; you cannot see both simultaneously.
Posted by Ken Ho at 5/12/2012 05:49:00 PM